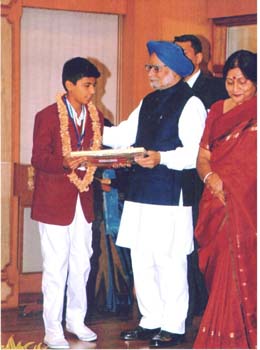 Brave Master S.S. Manoj, a VII std. student of Navodaya School, DMG Village, Gaddige, is the son of S.T. Rajshekar, a tailor at Saligrama and S.K. Aarthi, a teacher at Govt. Primary School in Bangalore. Manoj is presently staying with his uncle Ramesh, residing at KHB Colony, Hootagalli, Mysore.

It was a casual pilgrimage to Srirangapatna on Sept. 2, 2012, taken out by a family of three the father, the mother and their 13-year-old son. Anybody visiting the Sri Ranganatha Swamy temple in Srirangapatna make it a point to visit the Cauvery river either before or after going to the temple. So was the case with this family too.

After paying their obeisance to the Lord at the temple, the family went towards the river to rest for a while. Seen there were children enjoying a dip in the water, women washing their clothes, utensils, etc., etc. The son of the family was also taking a dip in waters. At around 10.30 am, suddenly, one of the woman who was washing her clothes, while trying to pick up the clothes, slipped and fell into the river. The woman was physically handicapped and didn't know how to swim.

The 40-year-old woman named Manchamma, unable to get out of the water, started crying out for help. The woman's daughter and niece were there at the river bank, not knowing what to do as none of them knew how to swim either. Seeing this, the son, 13-year-old Manoj, swam towards the woman, pulled her by her hair and dragged her till the river bank. Manoj had learnt swimming when he was just 8 years old, swimming in the canal at his village. This proved to be of great help in saving the woman. The woman couldnt believe what had just happened. She thanked the boy profusely and told him that he was God who gave her life.

This courageous act of Manoj deserves true appreciation and rewards. Accordingly, the State Department of Women & Child Development honoured Manoj with Hoysala Shourya award, which was presented to him by the Governor H.R. Bhardwaj on Nov. 16, 2012. Now, this brave act has been identified by the Indian Council for Child Welfare, New Delhi and Manoj will be presented the National Bravery Award 2013 by Prime Minister Dr. Manmohan Singh in the presence of President Pranab Mukherjee, Vice-President Hamid Ansari, Delhi Governor Lt. Najeeb Jung and other dignitaries on January 26 and he will also be given a chance to take part in the Republic Day Parade at New Delhi.

The award carries a certificate, a gold medal and a cash prize of Rs. One lakh awarded by the Government of India. Apart from these, the Govt. will also provide the gallant children with Indira Gandhi scholarships to pursue either technical or medical courses.

On this occasion Manoj said, that he is really happy and that he would use the scholarship amount to pursue a degree in Engineering.

We take care of old peoples.